In front of an audience of around 200 guests from science, the political arena and society, representatives of the science locations Bremen and Bremerhaven congratulated Gotthilf Hempel and paid tribute to the achievements he attained in the course of his research activities lasting almost 70 years. The event was moderated by actor Peter Lüchinger of the Bremen Shakespeare Company – in the role of William Shakespeare.

"I am delighted to be able to congratulate Professor Gotthilf Hempel, one of the most important founders of German marine research and the pioneer of marine science in Bremen, on his 90th birthday, said Science Senator Eva Quante-Brandt. "Gotthilf Hempel's diverse activities made a significant contribution to the development of German marine and polar research. Over many decades he has been committed to strengthening marine research in tropical countries.”

In 2010, the city of Bremerhaven granted Gotthilf Hempel honorary citizenship. In his laudatory speech, Torsten Neuhoff, mayor of Bremerhaven, emphasised Hempel's attachment to the harbour city: "We are delighted that you have remained loyal to our city even after retiring as director of the AWI and that you have repeatedly honoured Bremerhaven with your presence. We consider this to be an enrichment."

Like hardly any other individual, Gotthilf Hempel has rendered outstanding services to German tropical, polar and marine research. On the international stage, the strengthening of marine sciences in tropical countries has been of particular importance to him since his work in the 1960s in the Intergovernmental Oceanographic Commission of UNESCO. His travels and experience in this field reinforced his conviction that German marine research needs to be integrated into the international community and that it is essential to establish globally active institutes in order to make efficient research and education possible worldwide.

Prof. Dr. Hildegard Westphal, scientific director of the ZMT, particularly emphasised Hempel's commitment to relations with tropical countries. "For Gotthilf Hempel, partnership-based cooperation in science is of fundamental importance, especially in tropical research. In one of the ZMT's first major research projects at the Red Sea, he succeeded in getting scientists from four neighbouring nations in this politically difficult area to sit down at the same table with Germany and to carry out joint research over many years – in some cases to the present day. This is science diplomacy par excellence," said Westphal. "During his time at the ZMT, Professor Hempel laid the foundations for long-term scientific exchange with our colleagues in the tropics. He has created a ground-breaking approach to cooperative research that is geared to local needs and thus also contributes to the effectiveness of the research." Under Hempel's leadership, the ZMT summarised its cooperation with international scientific partners in a short set of rules, the so-called "Bremen Criteria", which were included in the Code of Conduct of the German Society for Tropical Ecology.

Gotthilf Hempel's sphere of influence ranged from the equator to the poles. The institutes he founded were marked by his own versatility. As director of the AWI in Bremerhaven and the Institute for Polar Ecology in Kiel, he played a decisive role in establishing German polar research.

"Professor Hempel was instrumental in establishing most of Germany's diverse and meanwhile excellently networked marine research institutes. Thanks to his commitment, we now conduct research on an international level from the polar regions to the tropics, from the atmosphere to the deep sea. He has helped to set the major infrastructures of polar research in motion, such as the research icebreaker POLARSTERN and the NEUMAYER station in Antarctica," said Prof. Dr. Antje Boetius, director of the AWI.

In the first years after the reunification of Germany, Gotthilf Hempel, as a member of the German Council of Science and Humanities, strove to integrate the East German geosciences and environmental sciences into the united German science system. Prof. Dr. Ulrich Bathmann, director of the IOW, recalled in his laudatory address Hempel's commitment to marine research in the new German states: "It is a stroke of good fortune that Gotthilf Hempel was always at the right place at the right time to advance modern, interdisciplinary marine research as a pioneer," said Bathmann. "This also applies to the Leibniz Institute for Baltic Sea Research Warnemünde (IOW): In the course of reunification, he consistently supported the preservation of excellent GDR research in the Council of Science. He recognised that the Warnemünde Institute of Oceanography, which had existed since the 1950s, could be a valuable link in the network of marine research in Germany as a whole. Even today, we still profit from Hempel's wise decisions, with which he, as founding director, shaped today's IOW in the post-reunification period."

The rapid development of marine research in Germany since the second half of the 20th century and the role it has played internationally since then have been inextricably linked with the name Gotthilf Hempel. In his closing remarks, he thanked the well-wishers with humour and a twinkle in his eye: "I am touched by so much affection and wish all my companions that one day they will celebrate their ninetieth birthday as cheerfully as I am doing today." 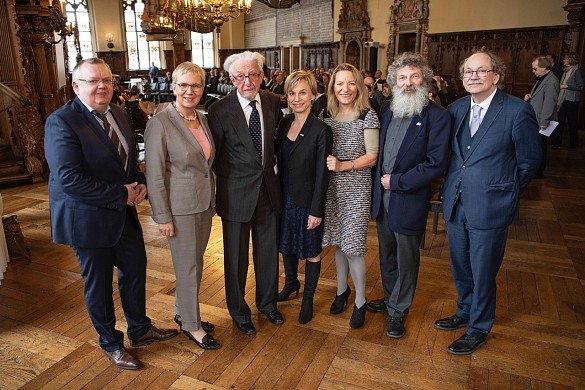